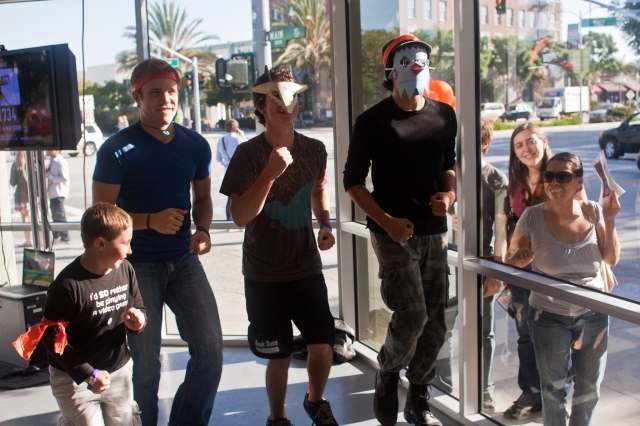 No not the Step Out Walk to Stop Diabetes, IndieCade! Every year some of the most creative independent game developers in the world assemble in this godforsaken corner of L.A. County to drink, dance and play games together.

Also, there’s like some awards show and some conferences and such. But mostly it’s about cool games and cheap booze! I’ll be there next weekend to express my love for both, and to prepare I thought I’d highlight a few of the lesser-known games I’m excited to play. Everyone knows how great games like Superbrothers: Sword & Sworcery are, but there are plenty of innovative and exciting projects on display at IndieCade every year that just get lost in the shuffle. Here are a few finalists from this year’s show that can’t slip under your radar.

This game has been available on Steam for months now, yet despite being lauded by critics (including our inimitable Nate Ralph) I bet you’ve never played it. And that’s a damn shame, because Solar 2 has a truly unique premise: you play a star system flitting about the universe with the freedom to take orders from a God-like alien entity or just flit aimlessly about the universe, building your tiny star into a bustling galaxy by ensnaring planets in your gravity well and sucking up smaller stars. It’s an amazing game that’s up for an award at IndieCade 2011, but I think you should pony up $10 and judge for yourself.

Papa Sangre has been available on the iTunes App Store for $5 since December 2010, and if you never played it you might have missed your chance; as of this writing, the game was no longer available for purchase. But it will be playable in Culver City next week as an IndieCade finalist, which is great because Papa Sangre is (to my knowledge) the only auditory horror game ever made. And when I write auditory horror, I don’t mean like some spooky Silent Hill 2 radio cracklin’ or somesuch. No, Papa Sangre is purely auditory; there are absolutely no graphics, just the echoing footsteps of unspeakable monstrosities chasing you through a pitch-dark labyrinth in the land of the dead. I’ll let you know when this game is back on the market, but make sure you invest in a quality pair of headphones for the best experience.

Fez hasn’t been released yet so I don’t actually know that it’s awesome, but take a look at the gameplay video and I think you’ll see why I’m so excited. You’ll play Gomez, a two-dimensional creature determined to find his way in a three-dimensional wilderness. It’s like a pixellated version of Flatlander with a catchy soundtrack, and if you remember my love for Miegakure you’ll understand how hot and bothered that makes me. It’s coming out on Xbox Live Arcade sometime early next year, and if I can score some hands-on time next week I’ll let you know if it’s worth your ducats.

It’s a musical jousting game from Denmark played with PlayStation Move controllers that uses no screens and requires players to dance around like chickens with their heads cut off and their balls in their hands. How does that not sound like a great time? The goal is simple: fuck up your opponent’s ball. Every remote plays the same musical track in sync; as the music slows down every player must slow down with it, because when the accelerometer in a remote moves too quickly the player takes damage. Every once in a while the music will speed up and the motion limits relax with it, creating this wonderfully weird dance battle as players bounce madly about trying to swat each other while keeping their balls safe. Currently the game works with Nintendo WiiMotes or PlayStation Move controllers, but it seems like a perfect fit for smartphones and rumor is we should see an iPhone version on display at IndieCade.

This entry was posted in Uncategorized. Bookmark the permalink.